What Is the Difference Between Deep Web and Dark Web?

You may have heard these concepts being thrown around, but you don’t really know what they are, except that they sound ominous. You may suspect that it’s a place (or places) where malicious hackers roam. You may have also heard of the so-called ‘intellectual dark web’, but that just makes matters even more confusing.

So, what is the deal with these dark web and deep web concepts?

What can you do on them?

How can they be accessed?

Let me clear the air with this brief introduction to the dark web for laymen. In this guide, I’ll walk you through the main concepts

What Is the Deep Web?

First of all, the deep web and the dark web are not one and the same thing, though they can overlap significantly.

The deep web refers to all the pages which are not indexed, which means that most search engines won’t return them to you after a search. Their crawlers don’t ‘see’ these pages, making them de facto invisible to these search engines.

This means that in order to access one of these pages, you need to either know their exact address (link) or to click on another link once you get in the deep side of the web.

Also, the deep web can include significant parts of the legitimate, mainstream web (like Netflix or Amazon pages), simply because they are personalized for users and not all URLs are meant to be indexed.

What Is the Dark Web?

The dark web is a layer even deeper: technically also part of the deep web (which makes it inaccessible unless you know exactly where to go), but focused on illegal activities and services. It can be pretty gruesome. Some people call it the place where humanity’s darkest side surfaces.

So what exactly is on the dark web?

On the dark web, you can expect to find any and all of the following (sensitivity trigger, better scroll down if you don’t want to be appalled):

As you can notice if you read the list, many of the things for sale on the dark web are shams, designed to get your bitcoins without making good on the promise. Of course, if someone is actually looking to buy access to such things, they don’t earn a lot of sympathy as victims of the scam. However, the fact that in many cases the services advertised are just scams doesn’t make the dark web less dangerous or disgusting.

The main marketplace for all these things is the so-called Silk Road hub. Authorities have managed to take it down and arrest its owner, then the marketplace was rebuilt by one of his lieutenants, who was recently arrested as well. It remains to be seen for how long this main black market can be kept down, but there are other minor hubs on the dark net for buying and selling illegal stuff.

What’s the Difference between Deep Web and Dark Web?

Many times the two terms are used interchangeably as if they are more or less the same thing. This is very inaccurate, as the deep web just refers to non-indexed pages, while the dark web refers to pages which are both non-indexed and involved in illegal niches. 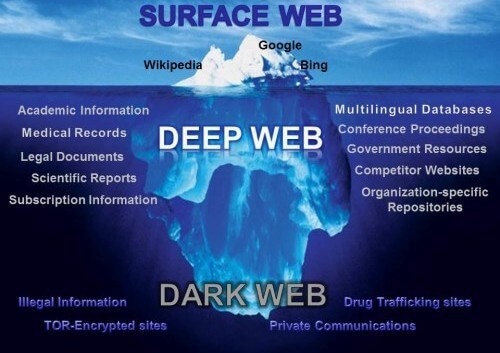 This image using an iceberg metaphor should clear it up in an easier to comprehend way. As you can notice, ironically, the dark web is actually deeper than the deep web.

The bottom line is this: the deep web might be made of up of non-indexed pages simply because search engines fail to see them or because they’re not deemed relevant enough to be indexed. In contrast, the dark web wants to be hidden, since it’s a hub for shady business on purpose.

The deep web is ethically neutral, it can be used for good or for bad. The dark web is where the parts of moral-lacking economy and society come together.

As far as the relationship between them goes, not all deep web is dark web, but all dark web is deep web.

Another concept you should be familiar with from now on is the surface web: it refers to all the websites normally accessible from search engines, the so-called vanilla parts of the internet. You can also see it pictured in the graph above.

Finally, the last concept you should know about is the shadow web. This is allegedly a layer of internet even deeper than the dark web, the well-known hub for criminal activity. Rumors say that this shadow web is a place where even darker, more serious criminal activity takes place.

Still, according to investigations by the world’s best cybersecurity researchers and hackers, this shadow web is just a rumor.

If you go browsing the deep or dark web, you may find plenty of advertisements which claim to offer up the gateway to this hidden corner of the web, in exchange for bitcoins. It’s a well-known scam, so be careful what you click if you go looking for it.

Sadly, this only contributes to the defamation of cryptocurrencies, which in themselves are not a bad thing for the economy and society.

However, since the shadow web concept is online and ardently discussed on some Reddit groups and other forums (which sound more like conspiracy theories authored by people who don’t understand much about how the internet actually works), this doesn’t mean it can’t become real at some point in the future. Still, even if it were real or will be real, paying for access is not the way to go.

Also, if it would indeed be a hub for illicit activity even more gruesome than the dark web, I don’t know why would you want to go there, anyway, unless you’re part of a special team aiming to take them down.

Is It Illegal to Access the Deep Web or the Dark Web?

In short, no, it is not illegal to go browsing on a non-indexed page. Or to use a high-privacy like Tor, traditionally associated with browsing the deep web and dark web.

In fact, part of the deep web might include your old blog from 10 years ago which search engines fail to index because it’s very old and devoid of content. Seems pretty harmless, right?

What is illegal is not just to access and browse the overlay networks called the deep web or dark web, but to look into illegal services sold on these networks. Or to attempt to hack things without permission. That’s what can get someone in trouble, not just simply the browsing.

Still, you should note that accessing the dark web without plenty of cybersecurity precautions can be dangerous for a layman. It can expose you to various dangers, which I’ll elaborate on below. If you absolutely must satisfy your curiosity on this, I will follow up with a guide on how to access the deep/dark web soon.

What Is the Intellectual Dark Web?

How about the intellectual dark web?

You’ve seen the concept floating around, maybe, so what’s the deal with this one? 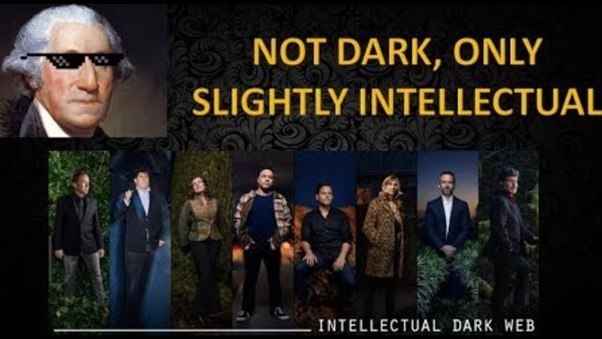 It consists of a bunch of conservative intellectuals, who traditionally were the only ones allowed to speak in public, aka they were the most visible on traditional information dissemination hubs. Mostly they are the WASP elite middle-aged or older, which weighed in as experts on television shows, published editorials in the biggest newspapers or taught at the biggest universities.

Since the alternative orientations have started getting their voices heard more, about a decade ago, these ‘classic’ intellectuals (many with alt-right orientations) are complaining that they are censored. They claim the media is now oriented towards leftist, progressive voices which are all about minorities, political correctness, and decolonization. Hence, they claim to have been relocated to an intellectual dark web, because no one hears their opinions anymore.

Funnily enough, they still own those traditional big channels of communication and there are still plenty of people following the same orientation as them. They just don’t like the fact that other opinions can also be heard nowadays.

I won’t elaborate on the specifics of social science currents and ideological sides here since it’s not the time and place. But you can read more about it, if you want, in this well put Vox editorial.

What Are the Main Dangers of the Dark Web?

Returning to cybersecurity issues, I need to stress that the dark web is a dangerous place, especially if you’re a non-technical person just looking to satisfy a curiosity. Don’t go snooping around there, or at least not without preparing.

I will put together a guide on how to access the dark web if you must, sometime next week.

In the meantime, you should know that the dark web can pose dangers to your safety even if you don’t meddle in it.

Because one of the most often transactioned goods on the dark web marketplaces is your data. There are tons and tons of gigabytes of leaked credentials and personal information for sale for hackers. That’s where hackers get their data for credential stuffing attacks, identity theft, and other shady business.

In an experiment I wouldn’t care to replicate, Cnet journalists wanted to find out exactly what the dark web knew about them. The answer: too much.

How to Stay Safe from the Dark Web

First of all, don’t go there.

Second of all, guard your data well. Be careful what data permissions you give (don’t just mindlessly click ‘yes’ on every pop-up just to get to a website). Follow the steps in our password security guide. Don’t use funny passwords which are easy to crack.

Sooner or later, some of your data will spill over to collections available for sale on the dark web. What you can do to protect yourself is to make sure that data is not accurate anymore, not detailed enough to cause harm, and that you have multi-factor authentication enabled everywhere you can use it. Having reliable anti-malware protection active is also very important.

If you really need to go to the dark side to check it out, take precautions. Use an encrypted privacy browser (like Tor), don’t share any real info about yourself there, don’t buy anything and don’t talk to anyone. Don’t install any software you come across while there. A guide on all this to follow soon.