Tokyo Revengers has taken the world by storm with the start of its anime and with the manga entering its last arc. A story that basically comprises gang fights is bound to have many powerful characters. Thus, today we will be ranking the top 10 physically strongest characters in Tokyo Revengers.

Two new characters have been recently introduced in the series who are bound to take a high place in the list. So, without further delay let us take a look at where our favorite characters ultimately end up.

With its diverse range of characters and gangs, Tokyo Revengers is surely one of the craziest and yet wholesome anime series of all time. Honestly, it made 2021 a lot better for us anime fans. There are a lot of gangs in Tokyo Revengers and their action is on point! Every gang gives off deadly vibes and each character has excellent abilities!

Once you start watching its first episode, you’ll instantly get hooked. With intense fights, emotional scenes, and so many best boys to choose from, Tokyo Revengers is one hell of a roller coaster ride.

The story revolves around a young man named Takemichi Hanagaki, who has the ability to leap through time, he can go back and forth in the future and past. The main purpose of his journey to the past is to save his first love, Hinata Tachibana, from certain death!

Takashi Mitsuya  is the Second Division Captain of Tokyo Manji Gang and is one of its founding members. He is also the older brother of his two sisters, Luna and Mana.

As the Second Division Captain, Mitsuya is shown to have strong fighting skills. He is also well known for his fighting skills among the other gangs. He was able to evenly trade blows with Taiju Shiba for a while.[ Additionally, Mocchi noted that he was impressed with Mitsuya's fighting skills.[ 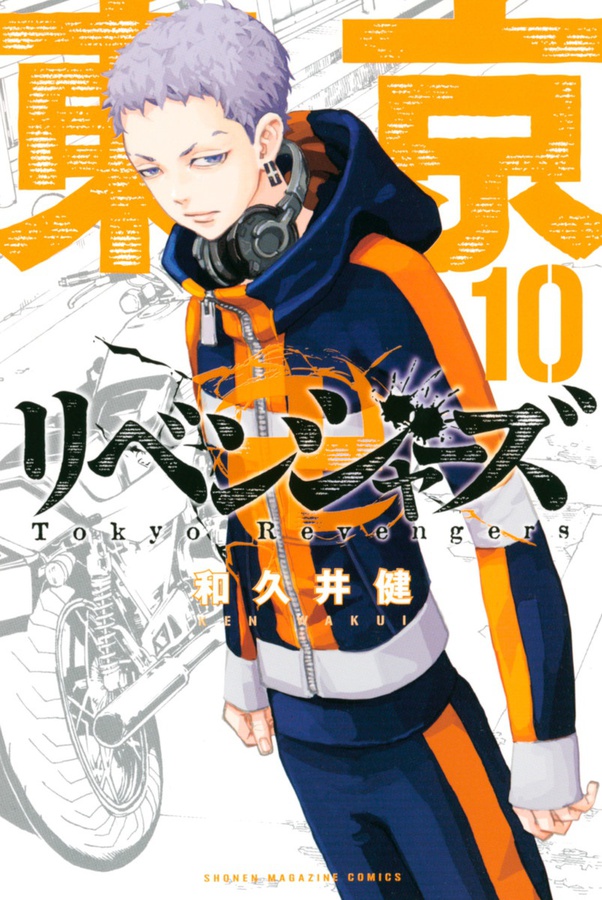 Went toe to toe with Taiju who was using 70% of his strength. 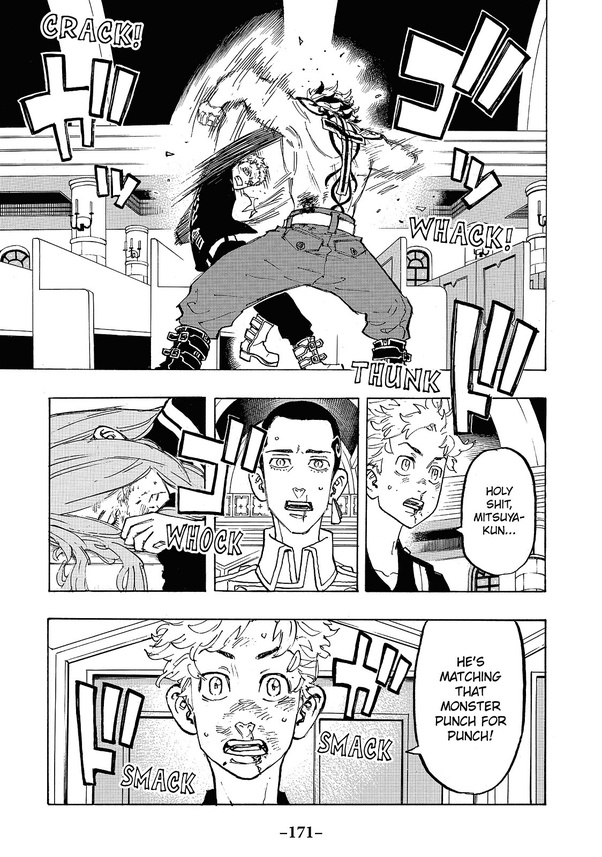 Keisuke Baji was the First Division Captain of the Tokyo Manji Gang and one of its founding members.

Baji is one of Toman's strongest fighters who is able to hold his own against several strong opponents by himself. His endurance is nothing to laugh at either, as he is able to fight his way past 50 enemies with a deep stab wound in his back and only having an iron bar by his side, only collapsing as he began suffering from anemia.

Baji has incredible physical strength, in his past, Baji was able to defeat Mandala's leader with a single punch to his face so strong that the wall he was slammed into was cracked. 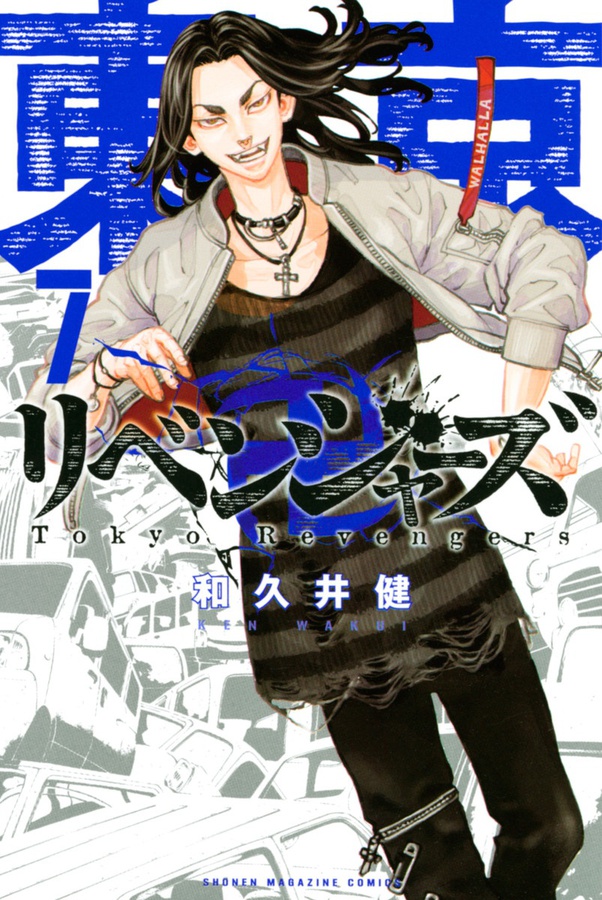 Even with a fatal injury, he soloed 50 guys and basically would have killed Kisaki. At full power he was far stronger and likely far higher on the list. 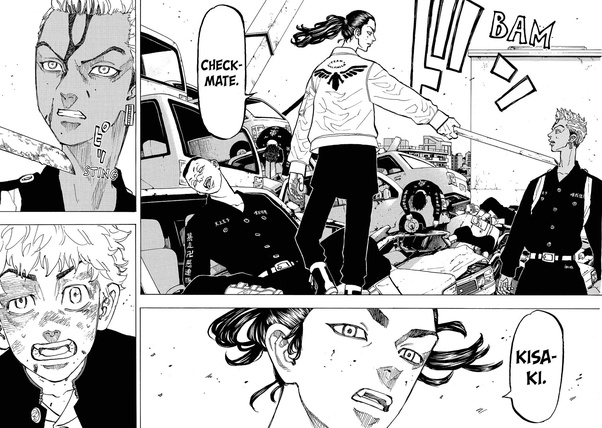 According to Takashi Mitsuya, although Peyan is stupid, he is stronger in a fight than he is. Once proving himself by defeating a Heavenly King with a single punch. Peyan fights in a very straightforward manner, displaying no other moves except heavy punches that have knockout potential against anyone they land on. 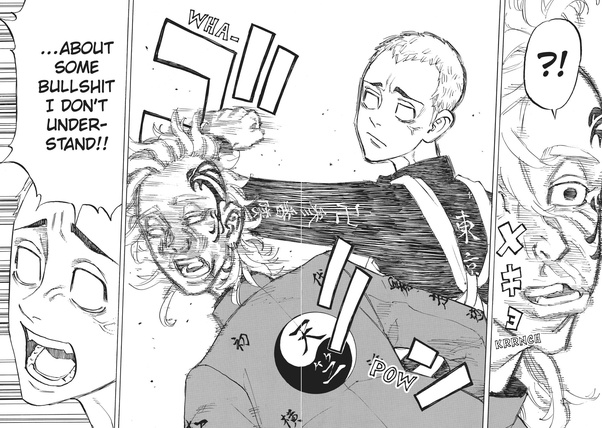 Stated to be stronger than Mitsuya.

Taiju is an incredibly powerful fighter. His blows are destructive and his endurance is extraordinary. Taiju easily defeated elites of Toman, who were very competent fighters in their own right. He was the only person in the series to knock out Mikey with a single punch, even if Mikey took that blow on purpose. He shrugged off a knife stab wound and went on to face several opponents. In addition, he also woke up quickly after being hit at full force by Mikey's signature kick. Because he was unrivaled due to his overwhelming raw strength, however, Taiju evidently never took the time to hone fighting techniques, so he fights in a rough and violent way, having been able to use brute force to get his way all his life. Taiju's strength is one of the greatest in the series. His punch has knocked foes unconscious or several feet back. 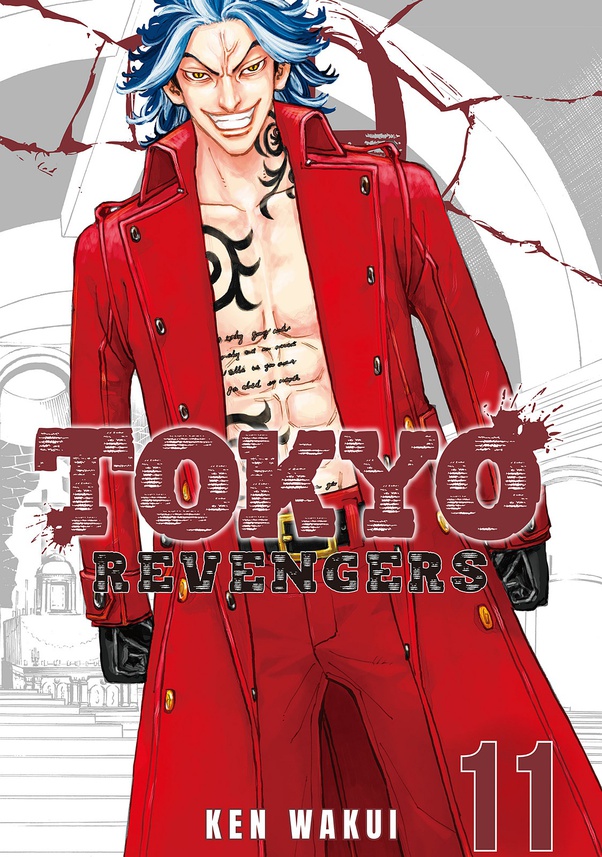 Even at 50% power, Hanamichi thought he was the strongest person he had ever taken punches from, and by this point he had taken attacks from a somewhat casual Mikey. At 70% of his full power, he went toe to toe with Mitsuya, one of Toman's strongest fighters and a Captain, with him dominating Mitsuya at higher levels of his strength. He even managed to make Mikey bleed with a direct hit, though Mikey wanted to take it. 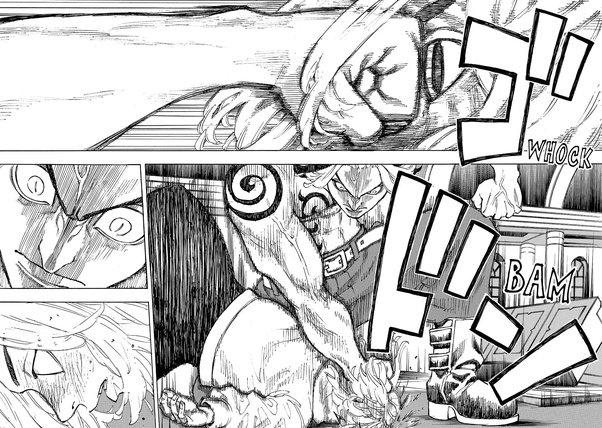 Mucho is blessed with great physical strength, allowing him to easily lift delinquents over his head or throw them when fighting them. He was recognized as Toman's strongest division leader, which was the reason why his division was tasked with special duties. Mucho also has knowledge of judo, which complements his muscular frame and impressive strength. His throws were destructive enough to break the spine of an opponent. 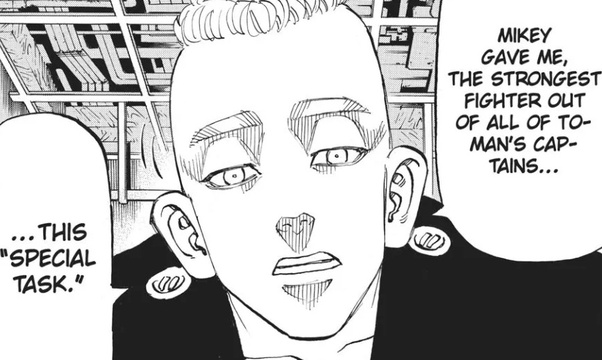 Is stated to be the strongest of Toman's Captains, including Mitsuya and Peh Ya

Souya is usually an above average fighter among the members in Toman, although weaker than his twin brother Nahoya. However, once something bad or unfair happens to one of his friends, he starts to cry and enters a state called "The Crying Blue Ogre." According to Nahoya, this state of mind makes him "100 times stronger" than Nahoya himself. This was proven shortly afterwards after he defeated the Haitani Brothers, Kanji Mochizuki and Yasuhiro Muto with relative ease, making him one of the strongest members of Toman when in that state. 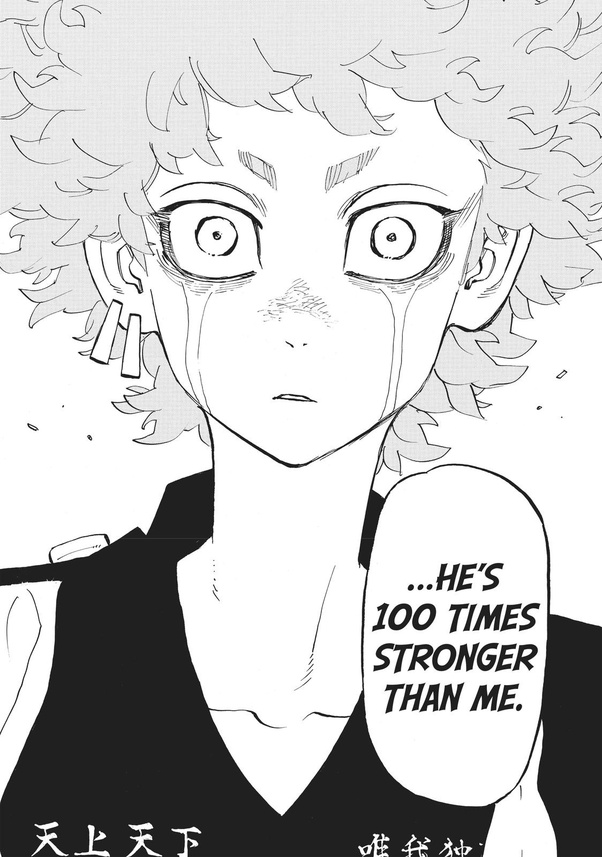 He isn't impressive in “base" form, but when he activates “Tear Mode" his strength increase by 100 times, in this form he's able to literally perception blitz and stomp Mucho, who's stated to be the strongest of Toman's Captains. 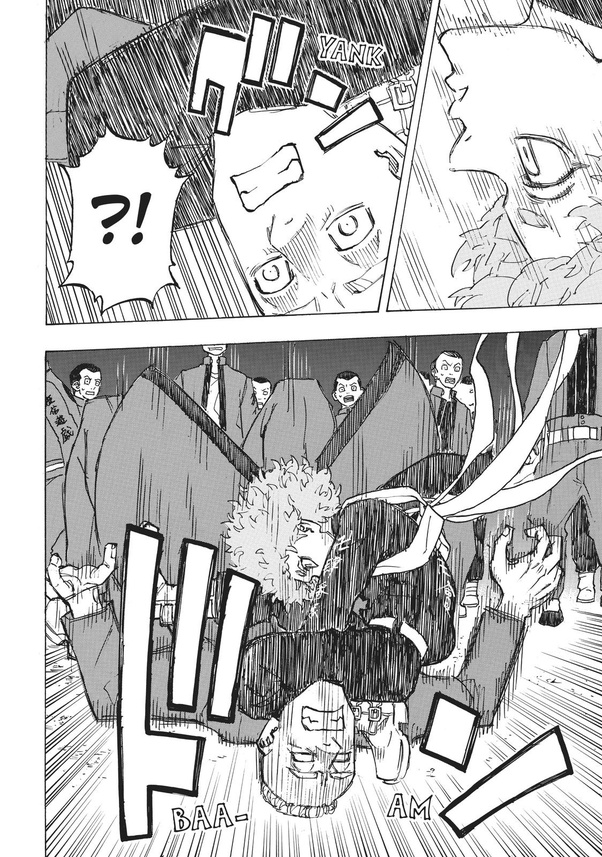 Kakucho's strength is acknowledged to be on the same level of the formidable Izana. He proves his mettle through his victory against Souya Kawata while he was in the "Crying Blue Ogre" state. After this take-down, he immediately defeated three capable fighters down in one fell swoop. He is extremely fast, so much so that Angry, in peak condition, was not able to react in time to his attacks. 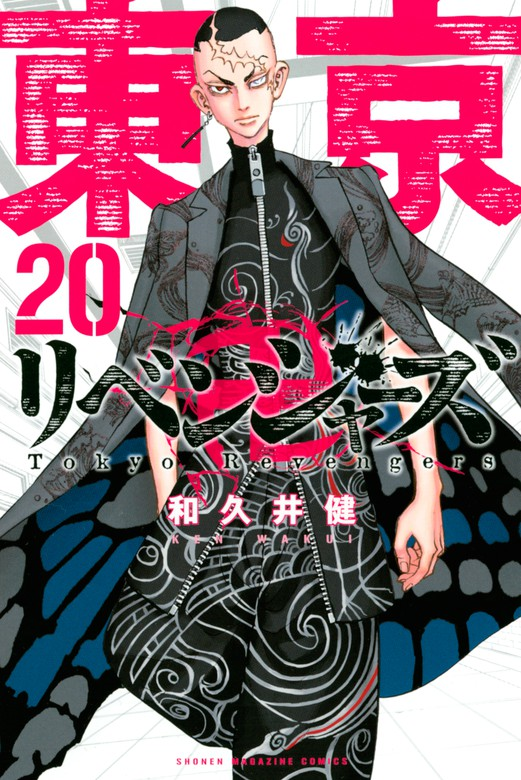 As Izana's right hand man, he's stated to be the very strongest of Tenjiku's Four Dragons by far. He matched Angry (“Tears Mode") in speed and beat him up with ease, and took down some of Toman's strongest Captains and Mucho with one hit each. 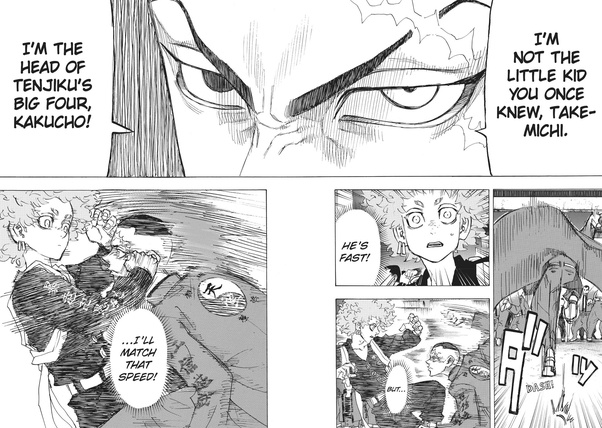 As Toman's vice-president, Draken's fighting prowess is incredibly fearsome. When he is hit in the head by a metal pole, he is still able to stand and defeat 20 opponents. His recovery is remarkably quick as he quickly heads right back into battle when reinforcements shortly arrive. He even survives a life-threatening knife wound.

With his immense strength, Draken prefers to fight like a brawler, using simple yet powerful and vicious kicks and punches. He has knocked back a formidable opponent taller than he is several feet back with a haymaker after defeating tens of enemies beforehand. He was also able to send flying the much taller and larger South Terano as well.

His power is so immense that he was able to hold his own against and defeat a whole gang by himself and was still in fairly good shape after that. Although one could surmiss that his strength is comparable to Mikey's it is proven this is not the case when a combined force of Draken himself, along Peh-yan, Chifuyu and Mitsuya were unable to defeat Mikey. 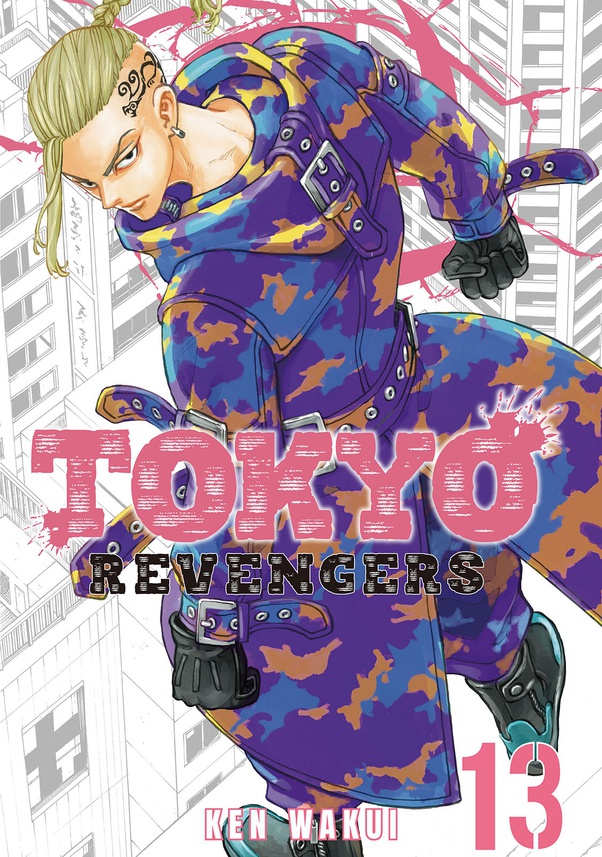 Narratively, he's supposed to be the very strongest guy in all of Toman after Mikey. It's stated multiple times that his power is second only to Mikey, and even Toman's Captains are visibly shocked at seeing his true power during several instances. He easily beats up Shuji Hanma during both fights they have, with Shuji being strong enough to take kicks from a suppressed Mikey. Draken with a single punch also makes Shuji fly several meters way even after he blocks, and Hanamichi actually considers his strength beyond anything shown in the series (including a suppressed Mikey). Not even mentioning him being able to solo 100 gang members on his own casually. 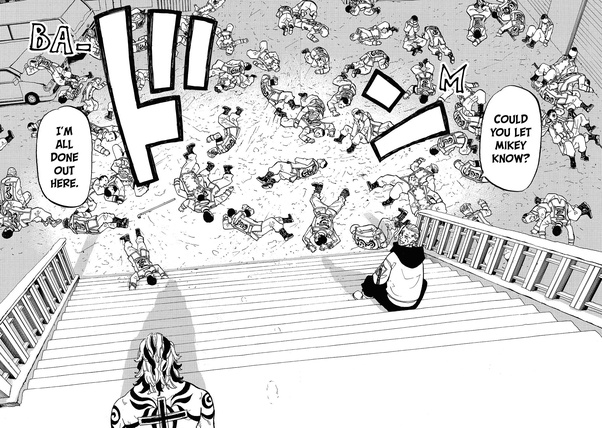 There's also the argument that since he's the right hand man of Mikey, he should be narratively superior to Kakucho, Izana's right hand man, who's easily the 4th strongest in the entire series. He's stated to be the biggest monster in Toman alongwith Mikey. 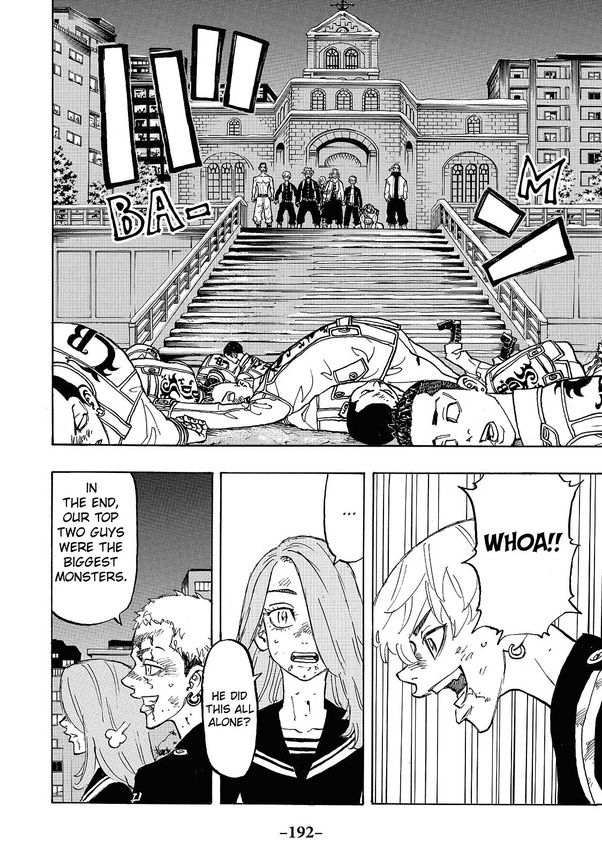 Izana Kurokawa (黒川くろかわイザナ Kurokawa Izana) was the former 8th leader of Black Dragon and former president of Tenjiku. He was also one of the main antagonists of The Tenjiku Arc.

Izana Kurokawa is the leader of Tenjiku, which means he has command over all his subordinates. He is shown to be the strongest member in the entire Tenjiku Gang and is also shown to be able to initially fight on-par with Mikey.

According to, Toman's Former 5th Division Captain, Yasuhiro Muto, not only is Izana a capable fighter, but what makes him the strongest in Tenjiku is his "Undefeatable Senses". This enables him to read his opponent's moves with relative ease and thus is able to counter them. 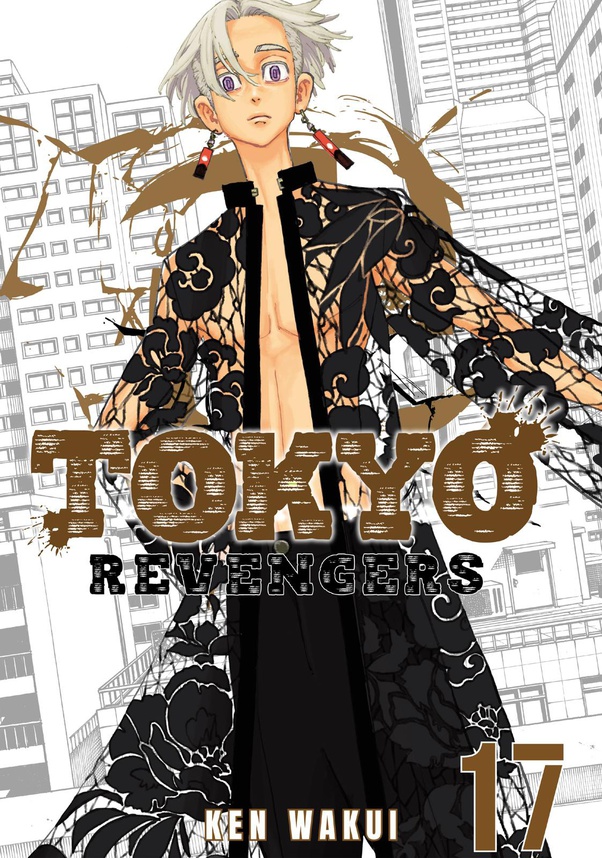 Easily stronger than everyone else before him on this list, casually stomping Peh Ya in one strike. 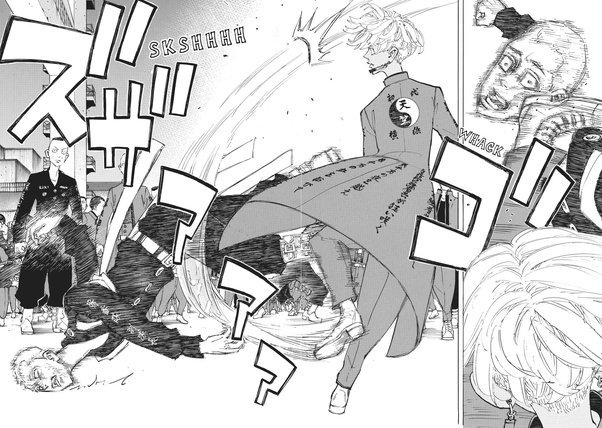 He was dominating Mikey initially in their fight, with Draken stating Mikey went all out. He gave Mikey the closest fight in the series, and at the end only last due to Mikey being slightly more durable and mentally resolved than him. 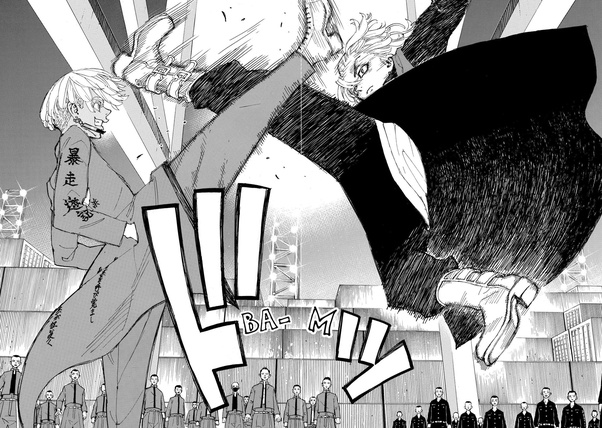 Mikey is regarded as the strongest member Toman and arguably the series from a fighting standpoint. His epithet, the Invincible Mikey, is indicative of his strength and how he is revered among other delinquent groups. He is strong enough to incapacitate other elite gang members with a single kick, and his enemies often remark that they cannot believe that he is a mere teenager.

He favors kicks more than punches, as it deals much more damage and eliminates his height disadvantage, making him able to go toe-to-toe with tall opponents. Although he has great punching ability, his kicks have crushed cars. The destructive power behind his legs is so infamous, his kicks are regarded as being "nuclear". 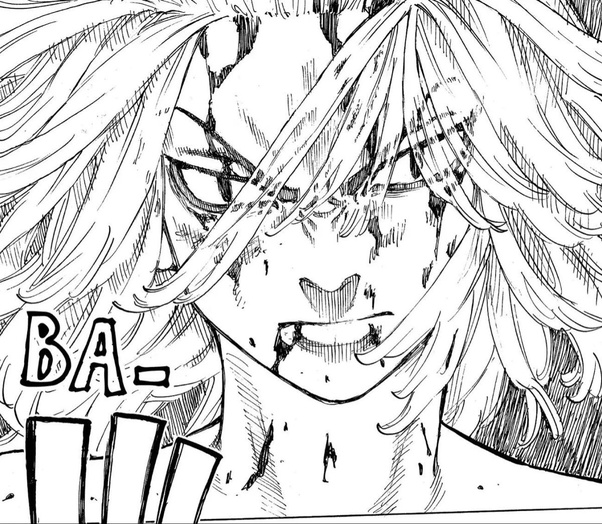 Duh. I really don't need to explain this. At full power Mikey can body any character in the series, with the only one coming close to him so far being Izana. However, these two guys are implied to be on the same level as him. 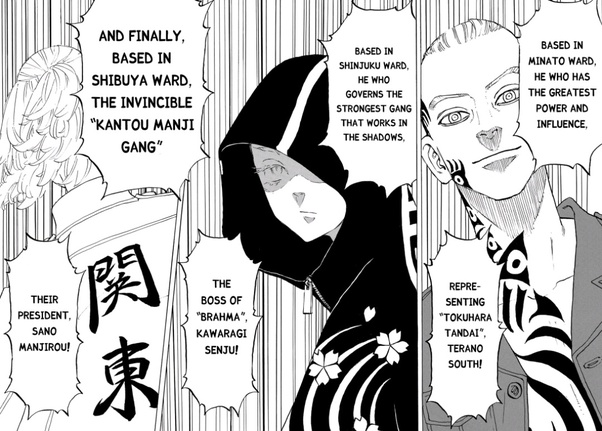 Aside from that, he beat Izana when serious, one shot Taiju and one shot Shuji Hanma, he's the #1 delinquent in Japan and narratively the strongest character in the series. 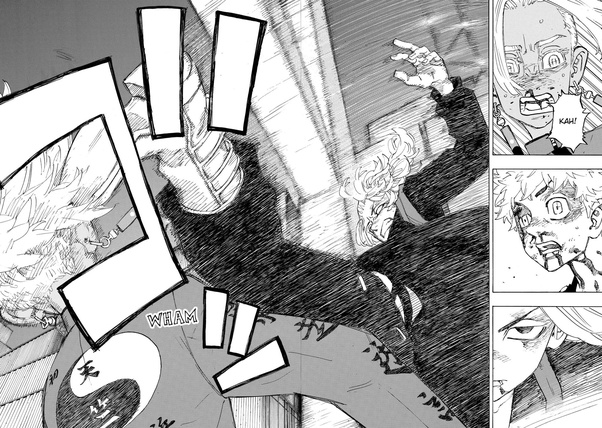