Best Giorno quotes of all time.

Giorno Giovanna (ジョルノ・ジョバァーナ Joruno Jobāna) is the main protagonist of the fifth part of the JoJo's Bizarre Adventure series, Vento Aureo, and the fifth JoJo of the series.He is a descendant of the legendary Joestar clan, and he wields the Gold Experience Stand.Gold Experience, Giorno's stand, can manipulate life, allowing him to create things like plants and little animals. This includes turning inanimate objects like pens, guns, and even rocks into living things. Here are the most famous giorno quotes all of time.

“Of course, I'll go straight to the hotel!... However, only with your empty luggage.” —Giorno Giovanna, Chapter 440: Gold Experience, Part 1


"Luca... Don't make me say the same thing twice. I've told you that I already paid, so I don't have any. So please don't make me say it a third time." — To Leaky-Eye Luka


"You wouldn't believe me if I told you it was an accident, would you? So I'm going to be disposed of, right? And you came here fully prepared, right? When you're going to dispose of someone, you always prepared for the possibility that you could end up being the one disposed of, right?" — To Bucciarati


"I plan on defeating your boss and taking over this city. In order to get rid of gangsters that sell drugs to children, I'm going to have become a gangster myself." — To Bucciarati


"You told me there were 2 paths, but sadly, you only have one." — Giorno to Black Sabbath

"So an act of disrespect is justification for murder in your book, huh? I see now. You taught me a very important lesson. Which is handy since you disrespected the life of that innocent old man. I took the liberty of changing one of your guns into your favorite snack. It's your last meal, Polpo. Hope you enjoy it." — Indirectly to Polpo moments before his death


“Luca... please, don't make me say the same thing twice. When I have to repeat something that only needs to be said once, it means that the listener is unintelligent.” —Giorno Giovanna, Chapter 441: Gold Experience, Part 2


“ I told you to stop... this frog isn't necessarily obedient towards me... It's only trying to protect itself. It has its own life to protect... Any attack directed towards it will be reflected back, resulting in death.” —Giorno Giovanna, Chapter 441: Gold Experience, Part 2 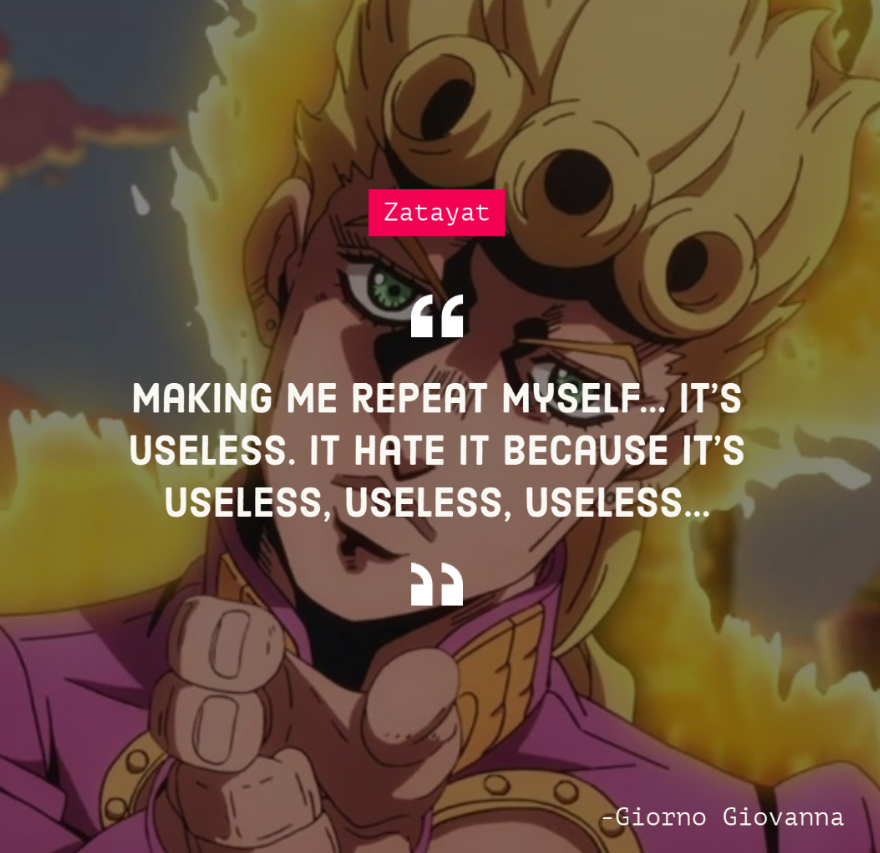 “You're someone who's prepared himself for conflict. If you are prepared to kill someone, then that must mean that in turn, you're prepared for the danger and possibility of being killed yourself...” —Giorno Giovanna, Chapter 446: Bucciarati Is Coming, Part 4


“I had just announced that I wouldn't allow civilians to get involved... I apologize, that was a lie. ” —Giorno Giovanna, Chapter 446: Bucciarati Is Coming, Part 4


“ No. You won't try to kill me anymore. Because you'll become my ally. I'm planning on defeating your Boss and taking over this city. In order to get rid of gangsters who sell drugs to children... you have to become a gang member yourself. ” —Giorno Giovanna, Chapter 447: Bucciarati Is Coming, Part 5


“ Yes...! To take control of this city, I have to enter into the organization that is currently in control and work my way up...! I'm going to become a Gang-star! ” —Giorno Giovanna, Chapter 448: Meet the Gangster Behind the Wall, Part 1 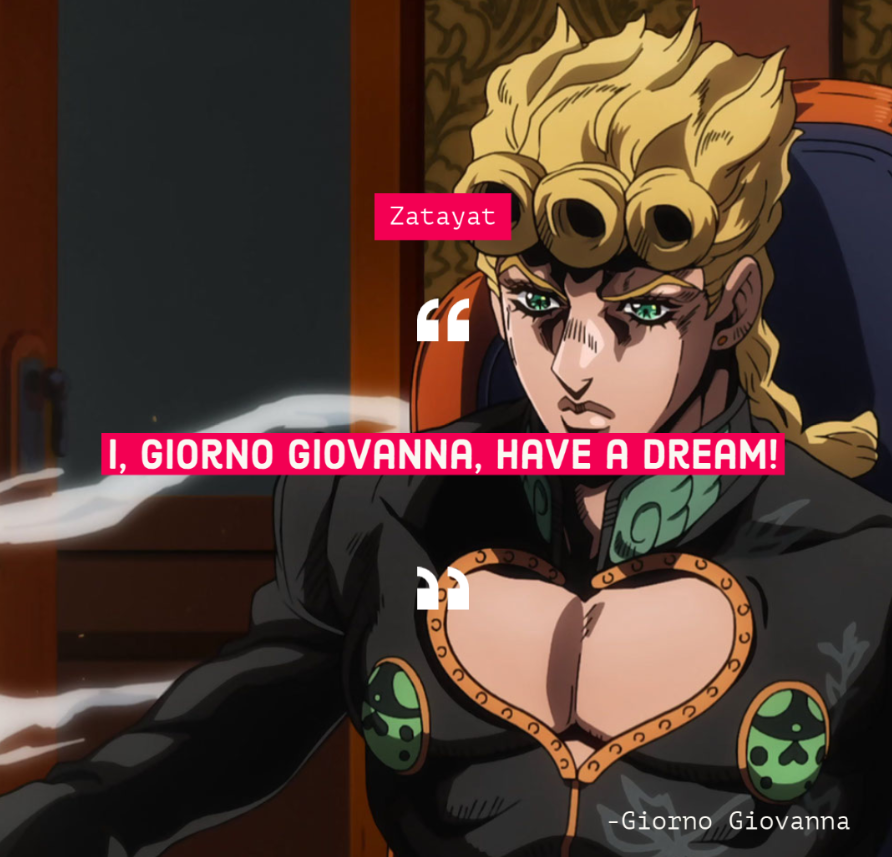 “ Even if Polpo is a capo in the organization that I'm intending to join, if he intends to get in the way of my dream... and if he's someone who kills innocent bystanders like that old man, as if his life was just trash to be tossed... I have to defeat him! ” —Giorno Giovanna, Chapter 452: Joining the Gang, Part 3


“ You said that there are two paths that I could follow... but for you to have that many choices? Impossible! Mudamudamuda mudamudamudamuda !!! Take your time and enjoy sunbathing! That's the singular path that you can follow. ” —Giorno Giovanna, Chapter 454: Joining the Gang, Part 5


“ So. You asserted that when someone is insulted, murder is permitted, correct? I see, that is in fact a very important distinction. Because you insulted that innocent old man's life. And that's why I turned one of your pistols into a banana. It's your last meal, take your time... enjoy it. ” —Giorno Giovanna, Chapter 455: Joining the Gang, Part 6


“ [Illuso] is already destined for defeat regardless! His exit gives me a better chance of survival. ” —Giorno Giovanna, Chapter 484: Man in the Mirror and Purple Haze, Part 6


“ They will catch us in no time if we steal a single car. But, if we steal a hundred cars, then thy might have a harder time figuring out which one we're on. ” —Giorno Giovanna, Chapter 502: Baby Face, Part 3


“ We have similarities. You and my Gold Experience. They both have the ability to create. You gave me a hint and pushed me within an inch of my life... And that's helped me grow a little! ” —Giorno Giovanna to Baby Face, Chapter 504: Baby Face, Part 5


“ I learned something... from your ability to turn humans into objects. Was it fate or some force that attracts similar Stands to each other...? People often learn more from their failures than from their successes and victories... Your ability to make people into objects... has allowed my Gold Experience to grow. ” —Giorno Giovanna to Baby Face, Chapter 505: Baby Face, Part 6 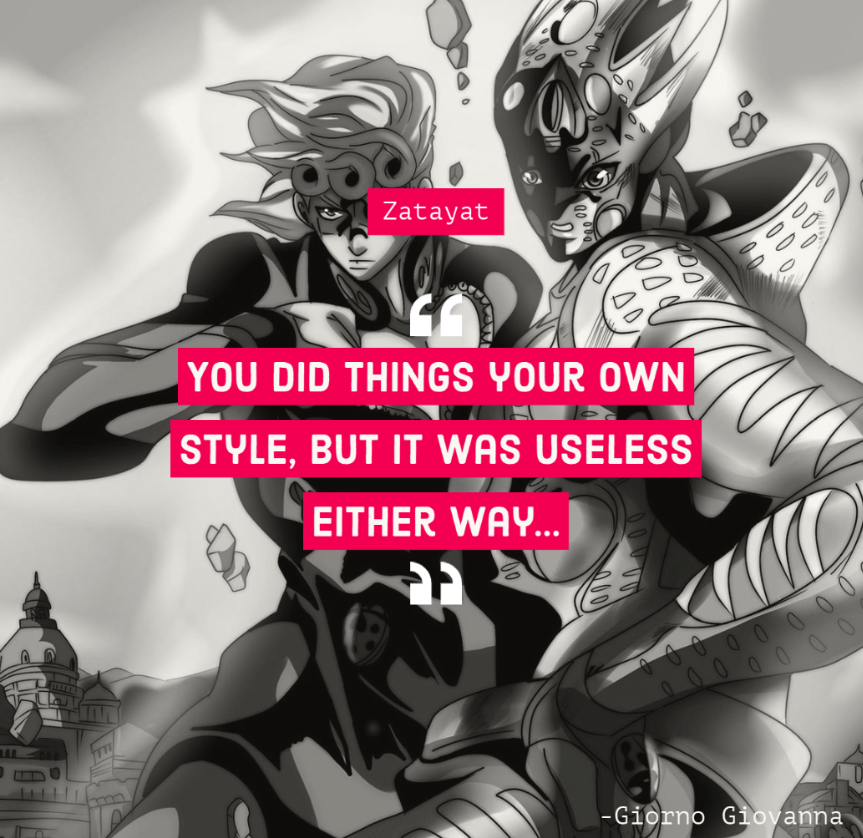 “ Only those with resolve can clear a path through the darkness... things are getting exciting... If the worst comes to the worst, at least one of us will die in the process... but it is you responsibility, and our resolve shall clear the path! ” —Giorno Giovanna, Chapter 513: White Album, Part 5


“ This is what resolve is! It is to carve out your destined path through the darkened wastes! ” —Giorno Giovanna, Chapter 514: White Album, Part 6


“ One more thing. About that theory of happiness you spewed... even as I look at you now, I feel no happiness at all, because victory was mine from the very beginning. ” —Giorno Giovanna, Chapter 561: "Green Day" and "Oasis", Part 8


“ We're leaving you here... I won't let anyone... hurt you anymore, I promise... but, I swear that I will bring you home. ” —Giorno Giovanna to Narancia, Chapter 577: The Requiem Quietly Plays, Part 6


“ All that will survive is the reality of this world. Righteous actions born from reality will never be annihilated. Bucciarati is dead, and so are Abbacchio and Narancia. But, their actions and their wills have not been annihilated. They are the ones who gave me this Arrow. Now, are your actions born of reality? Or are they born of superficial evil? We're about to find out. In the end, will you be able to escape annihilation? Boss? ” —Giorno Giovanna to Diavolo, Chapter 586: Gold Experience Requiem, Part 1


“ That which we have inherited from the departed must be taken onwards! I will not destroy this Arrow! ” —Giorno Giovanna, Chapter 594: Sleeping Slaves, Part 5


“ It's not possible to save everyone. The choices you can make are infinite, and the world is too complex. Neither you nor I can know which choice is right and which is wrong. Whatever might be the terrible consequence that you gace, the fact of choosing something and accepting its consequences is the most important thing. Maybe I'm the one being mistaken, but... We did choose the path of fight, and I'm not ashamed of it. I hope it's the same for you. I truly hope so. ” —Giorno Giovanna, GioGio's Bizarre Adventure II: Golden Heart, Golden Ring


“ 'You haven't betrayed anyone. Nobody ever let you. You don't trust anyone, so nobody ever trusted you. Your invincibility is useless. You may be strong, but there is no future in which you find yourself a purpose. Useless. Useless. ” —Giorno Giovanna to Cannolo Murolo, Purple Haze Feedback