Top 10 best footballers of all time

Here is a list of the Top 10 best footballers of all time.The list will be based on the ability of the player towards the game, his titles and his legacy in the sport. Let's start: 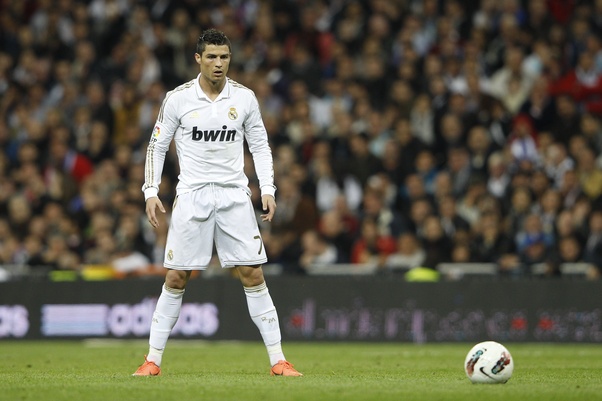 A machine, Ronaldo is a complete attacker, he have header, clinical and power shot, speed, dribbling and a consistency that is hard to find in a player.

The man already won everything at club level with Manchester and Madrid and Scoring almost every week in the last four years became a legend at Real Madrid being the All Time Top Score in the club. Probably the best defender of all time Franz was a versatile player, could play as a defender and as a midfielder both with brilliance and is also credited as having invented the role of the modern Libero.

Franz Beckenbauer won everything possible as a player, Champions league, World Cup, Budesliga, Ballon d'Or and still manage to won the World Cup as a manager, a impeccable curriculum of the German. One of the most underrated players ever, Romario was a genius of the area in every place he played, the brazilian was letal in front of goal and is the all time top scorer in football history with 768 goals in official matches.

Romario was soo good that despite Brazil managers and midia does not like him they had to call him in the last game of qualifications for World Cup, if Brazil lose they would stay out of the World Cup for the first time, Romario made two goals against Uruguay and in 1994 won the World Cup with a average Brazil being the best Player in the tournament, a true legend. There is no much to say of The Phenomenon, just watch a video in youtube and you will see how amazing was the brazilian, explosion, speed, balance. dribbling, clinical shot, pace all in one player, the man was feared by every team in the world with only nineteen years old.

Probably will be in top 3 if it was not the injuries but even so he manage to win the World Cup together with the brilliant squad of 2002 scoring two goals in the final and was top score in several tournaments, too bad we can not see his full potential. The man who was called by Pele as the most complete footballer in the history of the game, Stefano was a powerful, quick, skilful, and prolific foward, with great stamina, tactical versatility, creativity, and vision, who could also play almost anywhere on the pitch and is also considered the most influential footballer of all time.

The argentine won five consectives Champions League being one of the star of the supersquad of Madrid and despite not be the same championship of today, is very impressive win five consectives always scoring in the finals, Stefano was a god between men in his time. The man that put Total Football to work, Cruyff was one of the most revolutionary player of all time and was a genius who could play in any part of the pitch being good in all areas of the sport and his awareness of his team-mates' positions and intelligence made him a true Total Football player.

Cruyff won three consectives Champions League with Ajax, won the Liga with Barca that was in bad times and reach the final of World Cup with Netherlands being the main player in all occasions and tranforming those around him, an artist in the history of the sport. The man that trasformed football in poetry, Zizou was a elegant player with a unbelievable technique and a talent that we hardly will see again, he had vision, dribbling, pass, skills and his ball control was one of the best of the game, he was a genius.

Zidane Won The Champions League and World Cup scoring in both finals and still made a amazing tournament in the 2006 World Cup, with thirty four years old led france to the final, a maestro Zidane should have been the only player to be allowed to play in a suit. The king, Pele was a player ahead of his time and a complete footballer, fast, intelligent, tecnical, skillful, finisher, ambidextrous and very enjoyable to watch, people travel to another part of the planet to see the man play.

Pele Had won Three World Cup and despite the Brazil squad being amazing and managed to win without him, Pele was crucial for Brazil in two of the Three titles, Pele also made 720 goals in official matches, really good number for his time, Pele was the true number ten. The legend, Maradona was probably the most talent player ever, the argentine played with heart, its looked like a tiger on the field, once he started to run it was unstoppable, Diego was also a brilliant midfielder making him a threat for every team of his time.

Maradona greatest achievement was win the 86 World Cup single hand with a average Argentina actively participating in almost all the goals and leading his team to glory, Diego also won two Seria A with Napoli, a big achievement considering the championship difficulty at the time, It would be our Top 1 if he had more responsibility and consistency in his career. Leo in my opnion is the best of all time,a complete player Messi is all you look for in a footballer, he had elegance and calm towards the game just like Zidane, He dribles like god and have amazing ball controll just like Maradona, he is a deadly finisher and have several pichichis just like Romario and Pele, he is explosive and have a exceptional balance just like The Phenomenon, he is clever, pacient and intelligent just like Cruyff, he is versatile being able to play in several positions in the field just like Stefano and Beckenbauer, he have a master vision and pass just like Xavi and Pirlo and have consistency scoring and breaking records in the past six years just like Cristiano Ronaldo, Messi is all in one package.

Lionel already won Four Champions League being the man in three of than, reach two final in Copa America, one Final in World Cup, won a Gold Medal in olympics, won seven La ligas, Won Five Balon d'Or and etc, and he is only twenty eight, this is something that can happen only to the best footballer who ever walked on this planet.